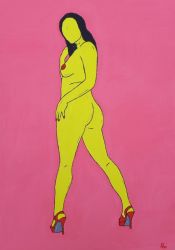 Painted with acrylic paints on canvas. Size is 70 x 50 cm.

Albi paints, draws and boozes long drinks in Ostrava. When he lived in Gibraltar, he was fascinated by the paintings of the street artist Vasquez - his painted subjects had a clear shape, yet they remained unfinished inside, only their color and contrast stood out. Unfortunately, as a street harmonica player, he could not acquire any of his paintings. When he later earned the money, Vasqueze did not appear on any of the European streets. So, after his return to Ostrava, Albi began to create his own paintings of abstract LSD realism.

Beyond the horizon of this painting:

They met one afternoon in Gibraltar. She was looking at Africa, he was playing with macaques. When the sun set, he invited her for a drink. She was married but agreed. They had great fun. At five in the morning they took a taxi and went swimming in Playa de la Misericordia, where she had a hotel. As she entered the gorgeous in her nudity into the sea, dawn began to rise over Málaga.